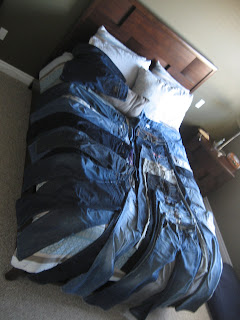 Sometime a couple years ago I inadvertently stopped paying attention to the "It" denim of the moment. It was always fun collecting the latest hyped up brands and in the end, you end up having many pairs with minor differences in fit and minor differences in washes. I am hoping there is a fellow jean addict out there that can relate to this! And the reason I still have so many is because I never really outgrew my jeans sizes and I had so many I rarely ever wore any out. :)

Anyways, pre 2000 I can barely remember what I wore: perhaps Levi's and Mavi jeans? The addiction for me started in the summer of 2000 when I bought my first pair of Juicy Couture jeans before I moved to Toronto. That was also the time when $60 denim disappeared and turned into $109/pair.. and subsequently became $265/pair within a couple short years. Here is the chronological list to the best of my memory of the denim of the times, you may recognize some of the brands that have come- and perhaps gone:

2000: As stated, my first pair of Juicy Couture. They had piped seams down the front and super faded thighs (a no-no now!).

2001-2003: The flood of Seven-for-all-Mankind, Diesel, Replay, Miss Sixty, Citizens of Humanity, Yanuk, and Blue Cult. And in the mix was a pair of better-fitting Levi's and a pair of from its upscale line, Levi's Capital E.

2004-2005: Got pairs of Hudson's (before the rage began in 2008/9), Blue 2 (a spin off of the Blue Cult line), Rock and Republics, and I was dreadfully obsessed with this line called Meli-Melo because there were so many paparazzi shots of Jessica Alba wearing them. There was also a brand endorsed by Oprah, James Jeans, but I never got a pair.

2006-2007: Seven-for-All-Mankind & Citizens of Humanity were still around and still had a nice fit so I collected a few more. But my biggest discovery at this time was Paige Premium, which was started by a former fit model, Paige Something-or-other. At first when I tried on a pair, I could not get my thighs into them, but other Paige styles like the Laurel Canyon, Fairfax, and Santa Monica styles were much more relaxed.

2008: Oh, the emergence of J Brand, Earnest Sewn, Joe's Jeans, and Genetic Denim into my life. I did try on a few pairs of William Rast and Superfine but I never took any home. More so because I couldn't get even one toe in the Superfine legs and the William Rasts fit too big. There were also brands like Habitual and Fidelity around but I resisted. I even resisted the ubiquitous boyfriend jean, too!

2009: My year of financial limbo because purchasing a Chanel jacket and 2.55 Reissue flap meant jean purchases took a backburner. I think I only picked up only one pair of Current Elliots all year- and they were on sale. This also marked the exhaustion of trying to keep up with denim. In fact, I did a closet purge and reduced the 40+ pairs down to about 30. Most were given to friends' kids, my mother, and donated to an orphanage in Mexico.

2010 - present: I found a pair of Rich n Skinny at Winners and that was all I bought- last week I did fall into temptation and bought a pair of J Brands because they were only $69 but I returned them because they looked like any other pair I already own. Great deal or not. :)

So this concludes the chapter on the denim addiction. Thanks for listening as it has been quite therapeutic, seriously. As for shoes and handbags... that is another story!
Posted by S.O.A.F. Digest at 9:13 PM