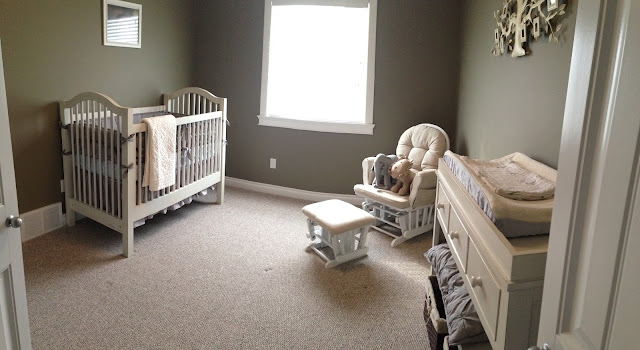 Earlier this year, we started working on getting baby ready and I shared a bit of research on nursery ideas. Well, here's what our baby's rainbow phobic room looks like so far... for most, it may be overly simple, but that's ok by us. Our child will fill it with his colourful character.. and wails and a couple weeks!  ;) 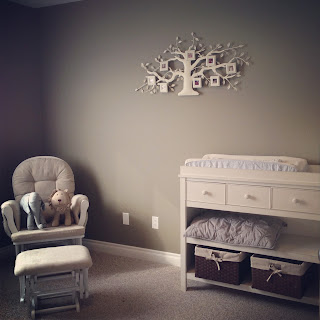 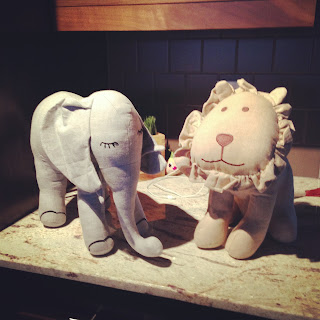 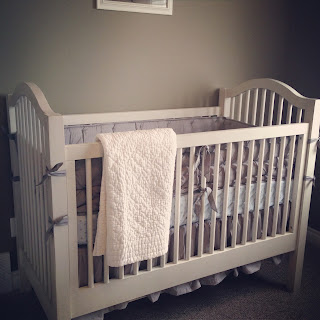 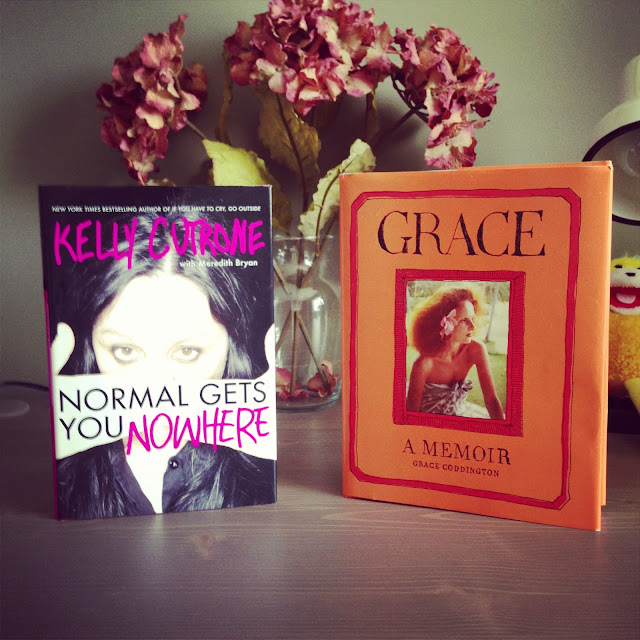 Since my maternity leave has officially started, my mission is to get through these two books while I am on call... will try to dish some feedback once I'm done! Besides, one needs to understand how books like Kelly Cutrone's end up on the $5.99 bargain book bin, right?

A few days ago, I suffered a bout of depression because I had to resist the urge to bring something home from Holt Renfrew's sale. We are talking about $1500 Celine leather knee high boots marked down to $370? And Special Edition Louboutins, Roger Vivier, and Alexander Wang shoes marked down by 75%? I was in love with the Celine boots. Even though they were a size bigger than my usual and I could not get my cankles and swollen calves into them, the thought passed still through my mind that at such a great price I can take them home and I can use them to motivate myself to get back to my pre-pregnancy size! Yeah right. Good think sanity kicked in and I had to walk away in sadness- more so when I watched other girls try them on as well and they looked soo great on!


Oh welps... I came home and had some free time (3 day weekend, yeah!) that I tried on some of the shoes in my closet to reassure myself that I will fit them again one day when all the swelling goes down. Well, if that never happens, guess who's going to have to sell some footwear!? *sniff sniff*

Anyhow, I accidentally pulled my ankle straps off my Tod's Aspen pumps, which I mentioned last year. Then I removed the other one, connected the two.. and created a double tour-like patent periwinkle bracelet:


And back to boots... at least the burgundy Barbara Bui riding boots I picked up in Paris still fit! Too bad there is way too much snow and slush to take them out now that we are back home.


My friend Jin married her sweetheart Kinmon in Bali last November. When she posted "taking everyone on our Bali adventure"... she absolutely was not kidding. I've never seen such highly professional cinematography captured in wedding footage- yet at the same time honestly portraying the personalities of the bride and groom during their celebrations. Their dream wedding was truly sublime and beautiful because it was and not by surreal editing. One of the best productions I've seen, really.

Of course, leave it to Jin in her elegance, poise, and stylish choices for dresses, hair, makeup, and flowers for her special day to create a visual wedding fashion editorial. I lost track of the number of outfit changes... and enjoyed every moment! Thanks for sharing, Jin!

Do check out Jin & Kin's big day by Balimetro wedding productions on here on Vimeo. I trust you'd agree it does set a new standard for wedding videography. Best wishes to the bride and groom!

This is a wee bit belated as it has been a couple weeks since we returned from our wonderful babymoon vacation in Paris. Mind you, the hefty credit card balances have not been paid yet but lets stick to funner topics! In between showing my dear hubby around the city and stopping all places touristy and romantic, we did squeeze in a couple hours to visit a few of my fashion-related points of interests.


1) Cafe de Flore - There's not one Paris Fashion Week-related story that does not mention this little iconic bohemian cafe. Garance Doré holds some of her interviews here and we did arrive on a wet snowy evening and had an early dinner of soup d'oignon and omelette de champignons along with the customary très petite café. We must have drawn some attention as we were the only ones really eating more than a shared piece cake. They figure we must be gluttonous North American. Most other patrons chatted and nursed their lone cafés for their long stays. There was an interesting, affluent-looking threesome that were seated next to us that we somehow started talking to. The two gentlemen were mature (ie one looked like he was in his 70's or 80's and the other was probably in his 50's) and the younger lady was probably Japanese and in her late 20's. Anyhow, she was also 8 months pregnant... the kicker is we were unsure of which gentleman was the father. By the end of the evening, we figured it was the older guy- given body language and how she nearly sat in his lap. Nevertheless, very nice and very eclectic people and their suggestion for sight-seeing around the city? Hire a car and leave Paris! Of course...


2) 24 rue Faubourg Saint Honoré - Most definitely I needed to visit this 3+ story Hermes mother flagship. Of course, the museum and jardin sur tôit were off limits (don't even ask me why I bothered enquiring!) but the place was pure magic in my shopping geek eyes. Despite the ratio of security guards & sales associates to customers being 1:1, it was not at all intimidating. Ask dear hubby the same question and he may have a different answer. There was a glass wall full of Hermès' new Berline bag- in every colour.. a leather saddlery in the back room with life side horse-back mannequin.. and in an alcove lounge area, there was a white-gloved unveiling of a gorgeous 30 cm pink crocodile Birkin for a young Japanese shopper (who already had significant stash of luxury boutique shopping bags next to her chair). Lucky girl.. I can only dream! And every second customer (most being Asian or aristrocratic-looking Europeans) carried a Kelly or a Birkin. I did try on some comfy Corfu sandals, scarves, and looked at perfume and jewelry. And I fell in love with a lovely S/S 2013 linen écharpe imprimé. The anchor print looks a little like animal or leopard print from a distance, but its not. Anyways, about the experience in general, every other H boutique I visit from now on will never be as enchanting!


3) 31 rue Cambon - Hands down the biggest Chanel boutique I've ever been to.. and surprisingly, Karl's army (phrase borrowed from Aleisha :) were not snobby at all and you were bombarded by "Bonjour! Bienvenue!" at every corner. Not surprisingly though, Coco's famous apartment was not open for visits. I was smart enough not to ask, this time! The walls were full of ready to wear -so lovely to touch and fondle but I had no time to try anything on because we waited such a long time in line for Ladurée macarons and we had dinner reservations at L'Hotel Beaux Arts *sniff sniff*. And it's interesting to see the abundance of small 2.55 Classic flaps hung off the walls like the polyurethane bags at H & M stores. One of my dear friends had a requested I bring her back a red classic flap from the flagship, but that personal shopping assignment was cancelled before our trip. For myself, my search there was for a pair of canvas espadrilles which will soon will be my spring/summer "mom" shoes. Unfortunately, the Cambon store did not have them in my size so no 31 rue Cambon shopping bag to bring home.. however, I found the espadrilles down the street at the Chanel in the Gallerie Lafayette. Mission pseudo accomplished! 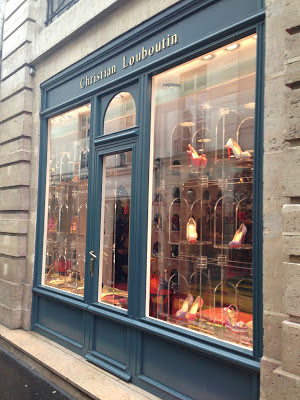 4) Christian Louboutin - Last to share about but not least, the mecca of red soles. Being over 7 1/2 months pregnant, I had no business being there, really. There were these gorgeous blue snakeskin Ron Ron stiletto pumps that I did try on (just for kicks). First question hubby asked me was, "How much?" I told him "795 euros, so don't worry I am not getting them even if I like them, honey!" He may not have believed me at first but seeing me teeter totter in them gave him more assurance. Ah, after baby comes.. it'll all be fair game again for me and sky high heels. :)

Before I end this long saga, honorable mention goes to the Printemps, Bon Marché, Petite Bateau, and a couple other boutiques. Unfortunately, I did not make it to Collette, Isabel Marant, or Vanessa Bruno..which is alright. There is no point to buy clothes in the third trimester anyhow. We really squeezed the window shopping expeditions into a couple of afternoons or so for the entire week in Paris. I can't complain though.. only so much willpower can ward off such concentrated temptation!